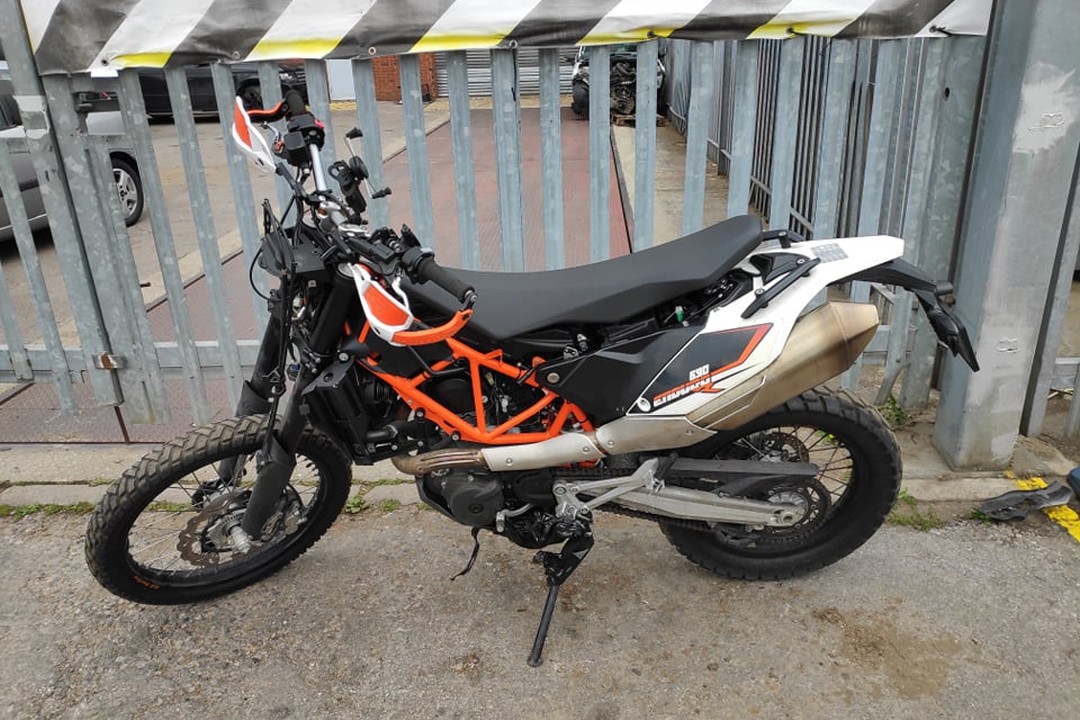 A stolen motorcycle is any rider’s worst nightmare. For Steve, however, the nightmare had not only become real, but it seemed to never end as he struggled to recover his stolen bike. Thankfully, this story does have a happy ending – but it took several months for Steve and the local police to find and retrieve his motorcycle.

“This whole happening was very emotionally draining for me because this motorcycle meant a lot to me, as I was dreaming of buying one for the past five years”, Steve told us.  “Adventure motorcycling is my most loved hobby and I can sincerely tell you that I felt legless without my moto”, he explained. And we totally get it: our bikes aren’t just mere means of transport, and any rider would understand why Steve had a tough time while his motorcycle was missing.

Back in January, Steve had parked his motorcycle on the street in London securing it with two locks and chains going through the rear wheel and around a steel post on the sidewalk, plus a disc lock and an alarm. The motorcycle was covered and had the Monimoto tracker hidden underneath the fairings. In other words, Steve wasn’t careless and did everything by the book: several layers of security including a cover, chains, disc locks, and an alarm. You’d think the bike was safe, and yet, the thieves still managed to get at it.

“They stole it at about 5 pm, it was already dark and they took advantage of the fact that a neighbor was working on his house those days, so there were noises of angle grinders all throughout the week. It took the thieves about ten minutes to remove all security measures and cut the front disk to remove the disk lock. Worse yet, they’ve threatened my neighbor to stay in house – she was the one to call the police. Finally, they took off by dragging or pushing my bike with a moped, according to two witnesses”, Steve explained.

Not only the thieves cut chains and locks on the bike and threatened a neighbor, but it appears the criminals were especially aggressive. “When I got the call from Monimoto, I went to the window to see the bike was gone. There was a crowd of people around that spot. I rushed out to find out there was a huge scandal: apparently, one of my neighbors kept throwing rocks at the thieves as they were working on the bike, but they were not bothered and just took off with the motorcycle”, Steve recalled.

He immediately called the police, and the officers agreed to go on a search based on Monimoto tracker’s signals. The tracking device was still active – the thieves hadn’t spotted it – and it was sending out approximate locations of the bike.

The Search for the Bike

After the initial search, Steve realized they were simply too late. Having spoken with Monimoto support and the police, he decided to continue searching on his own.

As bad luck would have it, however, the Monimoto tracker was only providing approximate locations instead of pinpointing exactly where the bike was. When installing the tracker, it’s crucial to test it out and make sure the GPS tracker is sending an exact location. If you notice a problem or get approximate location only please always let us know, and we’ll do our best to help you fix the issue.

Realizing only an approximate location was being given, Steve was still determined to comb the area and see if he could find the stolen motorcycle.

“Although the thieves have ditched my bike somewhere in the first night – as they always do to prevent police from locating them – I just could not find it. I went to the neighborhood where the approximate coordinates were indicating and contacted the police, then we went out on the streets searching for the bike. But we just had no luck at all”, Steve remembered. “The day after, I started getting signals again. It seemed the thieves were on the move, but again, I only received approximate signals. This was Friday. On Saturday, I went with a friend and searched around Essex, where it had ended up at that point. I could only speculate as to where exactly the bike was and try to ask around. For the upcoming month, I kept receiving approximate locations, so I kept trying to reach local neighborhood watch groups to make them aware of my bike”, Steve said.

Eventually, Steve decided to claim the insurance on the stolen motorcycle, as it seemed the bike was gone for good. It proved a little difficult as the bike was still registered abroad, but the claim came through.

Several months later, Steve got some more approximate locations from the Monimoto device. It appeared the bike was moving again. A few days later, Steve finally got an accurate location of the bike: a large truck stop in Essex. He immediately called the police, and, as the officers went to check out the truck stop, they found Steve’s motorcycle and several other stolen bikes.

“The police did not give me too many details, but they told me they were seizing my bike for further investigations and that I’m to pick it up from the impound at a later time. I found out from a worker at the impound that the bike was wrapped in black cling film, stashed and hidden under the platform of a vehicle transport lorry along with another Ducatti. Apparently, the truck driver was drunk but had paperwork for both bikes, so he did not get arrested. The documents were fake, obviously”, Steve explained.

Once the police released the bike, Steve finally got his beloved machine back.

According to Steve, the thieves had damaged his motorcycle, and he will need to do some repairs. “Now, the bike is not in the best shape. It’s missing a lot of parts and it seems it was hot-wired; the thieves forcefully removed the ignition and I’m waiting to get a quote from an authorized repair shop. The thugs managed to remove the saddle and clearly sold the side panels but miraculously, did not remove the Monimoto device. It was in plain sight, but as the black case blends quite nicely with the bike’s frame, I guess they just didn’t notice it.

The police have reopened the case, but because of the amount of crimes in the UK, there is little hope anyone is getting charged for it unless they find a network of criminals soon”, Steve said.

Although the recovery of Steve’s motorcycle took much longer than you’d expect, we’re so happy he got the bike back, and we appreciate Steve sharing the story with us. If you’ve just gotten your Monimoto, double-check that the locations you get are accurate, not approximate, and let us know if you need any help!