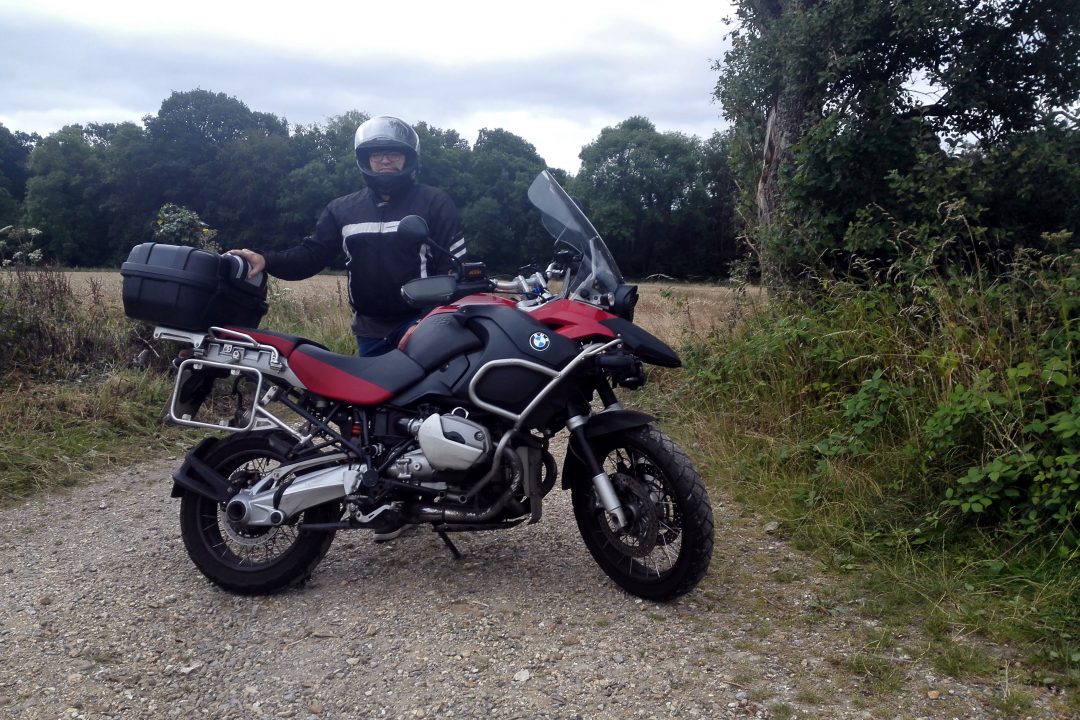 In March 2019, Colin* found himself facing a situation all bikers dread – “My bike has been stolen and the Police won’t help. All hope is lost.”

Because, despite a multitude of security measures, thieves still managed to steal his BMW R1200GS Adventure in broad daylight with ease. But fortunately, Colin had fitted his GS with a Monimoto motorbike tracker, so getting it back was a simple matter of following GPS directions. Here’s how it all happened…

21:45
It was Monday evening and I was finishing a meeting when my phone started buzzing with a call from my Monimoto motorbike tracker. I ran to the window and looked out and my bike was no longer in the street below. The bike was missing. Along with the two chains and disc lock I’d been using as extra security. So I guessed the thieves had loaded my bike into a van.
I quickly called 999 and ran outside.

No help from the Police

21:50
Whilst speaking to the 999 operator the first location alert came through from my Monimoto motorbike tracker.

I asked the operator to send the Police but they refused as I didn’t have a specific GPS location yet. The first alert had been an approximate location, showing that the bike was less than a mile away.

No witnesses to the crime

22:00
Upset, I finished my call with the 999 operator who’d told me I’d have to wait for the Police to call me back in 24-48 hours. I went back inside the building to speak with the security guard on duty. He hadn’t seen anything but said that CCTV would have covered the area, so there’d be a chance to identify the thieves in the future.

22:10
I received a precise GPS location showing that the bike was still on the move. So I decided to get an Uber and follow the bike myself.

Tracking down my bike

22:20
I followed the bike GPS updates for 10 minutes and by 22:20 the Monimoto app told me the bike had stopped moving.

I was now in a council estate in Islington and the area didn’t look very safe. I asked the Uber driver to drive into a side road that was showing as the GPS location for my bike.

It was full of dark parking areas and locked garages and I couldn’t see my motorbike. I felt unsafe so I asked the driver to go back to the main road.

22:25
I lurked in the bus stop opposite the alley where I thought my bike was and called the Police again. I explained that I was at the location but too concerned for my safety to search for the bike myself.

I have seen and heard that the gangs who steal motorbikes can be violent. The Police told me they’d send a car but it could take up to an hour or more.

22:45
At this point, I believe the thieves realised why I was there. I was standing in the bus stop in my motorbike clothes, maybe 20 meters from where they hid the bike, so perhaps I was a bit too obvious.

Two men on scooters wearing balaclavas rode slowly past me a few times. One actually came onto the pavement three metres away and watched me for a few seconds. I felt a bit nervous so I called the Police again. This time they said they’d send an emergency response vehicle.

Being reunited with my BMW R1200GS Adventure

22:55
The Police arrived and we entered the estate together. After a few minutes we found my motorbike, covered and hidden. The bike had the screen and seat broken and the alarm removed. The panniers had been broken open too. All the locks were still on the bike and except for the above, there was no other damage. The Police waited for me to unlock and start the bike to be sure I could leave. Grateful that I’d managed to track down my bike and the whole ordeal was over I rode home at 100mph!

This is the second time in three years that my motorbike has been stolen in London. The first didn’t have a tracker and was recovered after three months, mainly in pieces. Without the Monimoto motorbike tracker my new bike would have probably had the same fate.

The BMW alarm was no help and the Police are too under-resourced to be able to focus on motorbike theft. Meaning motorbikes are easy targets for criminals, especially in London. Even with a tracker I had to really push the Police before they would help me to recover the bike.

You have to be determined to protect your own property. However, once they arrived they were fantastic and really helped me. As it stands I have £400-500 worth of damage and my bike back in my possession. Which is a great result, all things considered.